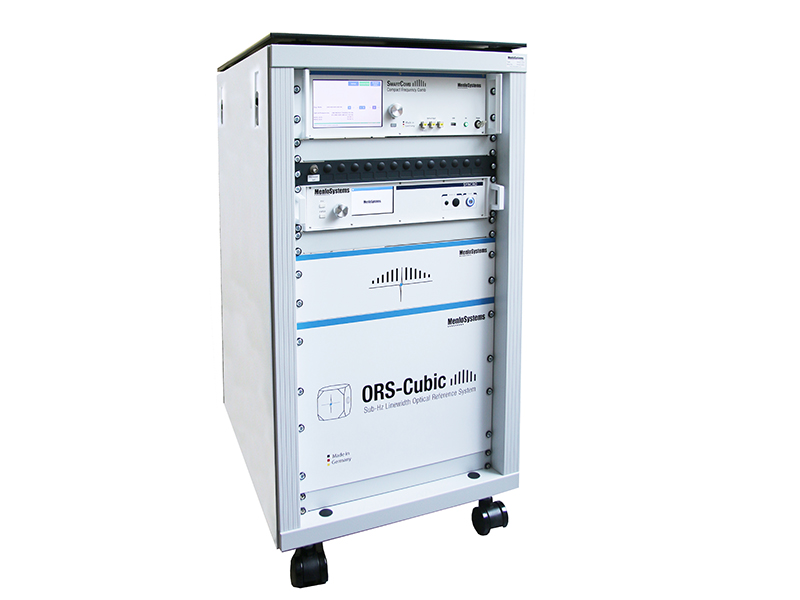 Synchronized view into the Universe

Italian researchers have successfully synchronized two remote radio telescopes by transferring time signals derived from Italy’s atomic clocks to their individual local clocks – with the aid of frequency combs sourced from Menlo Systems. The technique promises to significantly enhance the precision of observations of radio emission sources in the Universe.

Observations of remote cosmological phenomena also involve long-distance communication on the terrestrial scale. To maximize resolution, astronomers simultaneously observe distant sources of radiation with radio-telescopes located as far apart as possible. This in turn requires the signals received by the different telescopes to be synchronized with reference to a master clock. Researchers from several Italian institutions now report in the journal Optica1 a major breakthrough in correlation techniques. They used ultrastable laser light to transmit reference signals derived from an atomic clock at INRIM to radio telescopes in Medicina and Matera, thus providing a common timing standard for both. This enabled their observations to be precisely synchronized, effectively transforming the two instruments – which are more than 600 km apart – into one. The vital task of synthesizing the different frequencies used by the laser and the two telescopes was carried out by two FC1500 frequency combs and a PMWG-1500 system2, designed and manufactured by Menlo Systems.

The trick is in principle very simple. The greater the distance between two (optical or radio) telescopes that are targeting the same object in space, the higher the resolution of the resulting (combined) image. This technique, which is known as very long baseline interferometry (VLBI) has developed into one of the most effective and revealing methods for investigating the nature of exotic objects, such as supermassive black holes, in the Universe. The success of VLBI is dependent on the extremely accurate time stamping of the radio signals received by each observatory involved, which allows the data to be subsequently correlated. By doing so, it is possible to retrieve the relative delay in the arrival time of the sky signal to stations located on different continents and from this, gather relevant information about, e.g., the source structure and position, atmospherical and Earth orientation parameters, or the relative distance between the terrestrial stations. The major challenge lies in establishing the temporal correlation between the individual instruments. One of the physical effects that degrades the quality of the synchronization is the relative phase instability of the antennas’ reference clocks, which affects the timestamping precision. A new study carried out by research groups based at the Italian National Institute of Metrological Research (INRIM), the National Institute for Astrophysics (INAF), the Italian Space Agency (ASI), and the National Research Council (CNR) combines maser-based atomic clocks with laser technology to achieve a new level of precision. The authors of the study first synchronized the coherent optical frequency signal generated by an ultrastable laser with one of the atomic clocks contributing to Italy’s standard atomic time, which is located at INRIM in Torino. The clock signal was then transmitted via a 1739-km-long stabilized fiber link to radio telescopes in Medicina and Matera and used for VLBI observation instead of the local clocks. In this way, the two antennas, which are over 600 km apart, could be operated with a common time base, allowing a better synchronization and correlation of the received sky signal.

The frequency comb serves as a flywheel

To coherently up- and down-convert the signal of the radio frequency standard located at INRIM, the team used frequency comb systems and the Photonic Microwave Generator PMWG-1500, designed and manufactured by Menlo, acting as flywheels. The researchers stabilized the repetition rate of a frequency comb to the signal derived from the hydrogen maser, thus fixing the frequency difference between the individual teeth of the frequency comb. In this way, the timing signal was converted into a coherent optical frequency signal. An ultrastable laser signal was then referenced to the frequency comb and transmitted to the two radio telescopes through fibers of the standard telecommunication network.

The ultrastable laser transferring the clock’s phase information operates at a frequency of ~200 THz (200 x 1012 cycles per second). However, each of the telescopes operates at radio frequencies in the region of 10 MHz (10 x 106 cycles per second), and here again Menlo’s frequency combs came into play. This time they performed the down-conversion of the optical frequency of the laser encoding the standard clock signal to the radio frequency domain at which the telescopes operate. This setup enabled to generate highly correlated radio frequency signals at distant places, which were used to precisely timestamp the signals received by the two telescopes

Coupling atomic clocks to lasers to explore the Universe

“The distribution of time and frequency signals over optical fiber has become a fundamental tool in high-precision frequency measurements,” says lead author Cecilia Clivati, who works at INRIM. “It provides for greater precision and higher stability in comparison with the transmission of microwaves via satellite,” she adds. “At INRIM, since years, we have exploited its potential in basic and applied physics experiments. New physics is often uncovered by measuring parameters with ever greater precision, and we believe that this technology can significantly contribute to the task.”

The researchers have now used the laser-synchronized radio telescopes to observe a catalogue of reference radio sources. “We chose to look at well-known, luminous objects in order to ascertain whether the technique works as expected,” Clivati explains. – The principal investigator of the project, Davide Calonico, and Cecilia are excited by this achievement. “Our initial observations with the new technique have demonstrated that it is possible to overcome one of the most significant barriers that have so far restricted our view of the Universe – the problem of the temporal synchronization of observational systems,” says Calonico. “Thanks to the level of performance that optical fiber technology has now reached, it is possible to imagine the creation of a global network of telescopes that are linked to each other and to the nearest metrology institute.”