Towards 6G: A testbed for passive devices for THz communication

Using the TeraSmart system available from Menlo Systems as their testbed, a team led by Dr. Emma Pickwell-MacPherson in the Department of Physics at the University of Warwick has developed a new generation of bandpass filters for the manipulation of terahertz radiation. Their fabrication and characterization represents an important step towards future 6G communications technologies.

With the aim of simplifying the manipulation of terahertz (THz) radiation, physicists led by Dr. Emma Pickwell-MacPherson in the Department of Physics at University of Warwick (Coventry) have developed a set of innovative bandpass filters that can be fabricated by a 3-D printing procedure. The project forms part of the team’s efforts to improve the efficiency of communications systems based on THz radiation. To test the functionality and performance of the new multiplexer/demultiplexer (mux/demux) filter elements, the group used Menlo Systems' TeraSmart THz spectrometer with two independent transmitter-receiver antenna pairs. 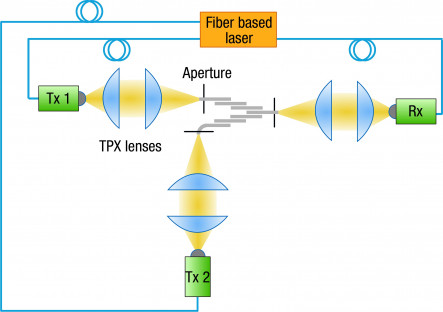 Schematic of the testbed for a mux/demux device. THz radiation from the THz transmitter antenna is focused into the aperture of the first waveguide within the stack. The output radiation from the terminal waveguide is collected by the receiver antenna. (Figure adapted from original publication)

For physicists, the field of THz radiation offers a wide range of problems and possible applications. The THz region, which lies between the classical microwave band and the infrared, is a segment of the electromagnetic spectrum that is relatively little used. This is largely attributable to the fact that the development of effective transmitters, sensitive receivers, and the other optical components – such as filters – required for the control and manipulation of THz radiation, is a challenging task. Indeed, compact and economical means of manipulating THz frequencies for use in fields like communications and imaging are not available today.

To bring this goal a step closer, Dr. Emma Pickwell-MacPherson’s group in the Department of Physics at the University of Warwick have introduced a new approach to the fabrication of THz bandpass filters, which is based on 3D printing. 3D printing has emerged as an uncomplicated method for the production of optical components for use in the THz frequency band. The rapid ‘prototyping strategy’ permits the fabrication of complex structures with tolerances of a few hundred of micrometers within the space of a few minutes. That enables researchers to test even components with exotic geometries for use in filter technology. Thanks to increasing interest in the applications of THz radiation, the demand for optical components that enable it to be controlled is rising. In this context, bandpass filters play a key role.

Bandpass filters are elements that transmit a defined portion of the frequencies contained in an incoming signal. Frequencies lying above and below the transmission window are either rejected or attenuated. Pickwell-MacPherson and her colleagues fabricated their novel dielectric filters from polystyrene. The filters are comprised of between two and five interconnected waveguides (with cross-sectional dimensions of 1.2 mm×1.2 mm), which are separated by 100-, 200- and 400-μm air-filled gaps, each offset by 25 mm along the longitudinal axis. The design of the filters is based on the theory of mode coupling, which describes the propagation of electromagnetic waves in waveguides.

In their experiments, the researchers in Coventry used Menlo’s TeraSmart fiber-coupled THz spectrometer. The instrument emits pulses of THz radiation, each lasting for approximately 1 picosecond (10-12 s), with a bandwidth of up to 5 THz and a dynamic range of 90 dB. “In this particular study, the wide dynamic range of the TeraSmart system played an important role in the characterization of the filters, since they are intended for use at the low end of the THz region, where the signal-to-noise ratio is higher,” says Arturo Hernandez-Serrano, a postdoctoral research fellow in Pickwell-MacPherson’s team and lead author of the study.

The new bandpass filters can also be readily coupled together in series, and the team has used this feature to construct a novel form of ‘mux/demux element’. This is a device that is able to separate and recombine selected frequency components of the input signal. Likewise, a prism can be understood as a ‘demultiplexer’, since it can split visible light into its constituent colors. The same prism can also recombine these frequency bands into a beam of white light, in which case it acts as a ‘multiplexer’. This example illustrates why multiplexing procedures play a crucial role in optical signal processing and data transmission.

“With our new mux/demux element, two data streams, which are encoded in carrier bands with different frequencies and propagate within the same fiber, can be separated for processing,” as Arturo Hernandez-Serrano explains. The basic structure of the filter can also be easily extended to permit the separation or combination of more than two independent signals. “Our spectrometer system possesses two independent transmitter-receiver antenna pairs. This feature was of fundamental significance for the demonstration of the filters as multiplexers. Menlo‘s fiber-coupled spectrometer gave us the flexibility to position the beam paths in diverse configurations, and thus allowed us to analyze the characteristics of different filter combinations,” Hernandez-Serrano adds.

The new findings open up the route to the communication technologies of tomorrow. The demand for faster Wi-Fi connections continues to rise, and work is underway on the next generation of telecommunication networks – 6G. This need for higher rates of transmission could be met by THz-based networks. The current 5G technology makes use of frequencies below 60 GHz. The coming generation of hardware will need to operate at higher frequencies – frequencies in the THz region. However, in comparison with established systems, which exploit infrared radiation, visible light and microwaves, THz-based technology has a lot of ground to make up.

Pickwell-MacPherson and her colleagues are convinced that their mux/demux components, together with many other photonic elements fabricated by 3D printers, will perform vital functions in the next generation of optical, THz-based communications hardware. “We have successfully demonstrated that fast, robust and economical methods for the production of photonic components in the terahertz regime are already within reach,” says Emma Pickwell-MacPherson. “We hope that they will help usher in the era of THz-based telecommunications systems.”