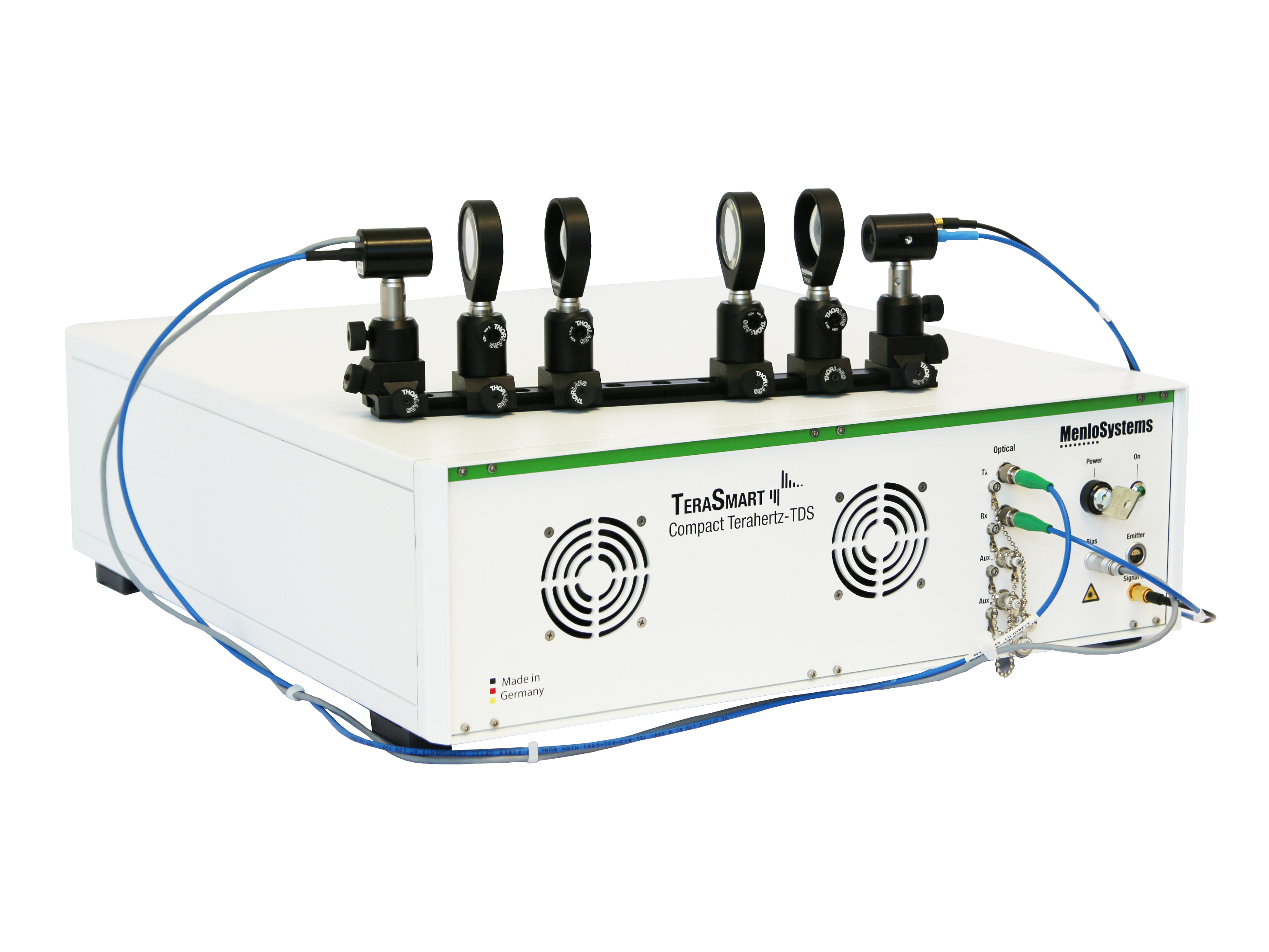 Researchers at Aalto University in Finland, led by Aleksi Tamminen, have introduced a new approach to imaging with terahertz radiation. The TeraSmart Compact Terahertz Time-Domain Spectrometer manufactured by Menlo Systems plays a crucial role in their experiments.

Terahertz (THz) radiation offers an attractive research field for physicists, because it is one of the few regions of the electromagnetic spectrum that remain virtually unused. Both the generation and detection of THz radiation present specific challenges, but its utilization also opens up a range of technological applications – extending from body scanners and wireless links to biomedical instrumentation for the characterization of biological tissues. The Millimetre Wave and THz Techniques Group in the Department of Electronics and Nanoengineering at Aalto University (Espoo, Finland) is one of the teams working on the medical applications of THz radiation. They have developed a new strategy for THz imaging, which makes use of holograms, neuronal networks and a single, fixed emitter-detector unit.

In the method conventionally utilized for imaging with THz radiation, the sample of interest is sequentially scanned. This usually requires that the position of the emitter-detector system or the target itself must be progressively altered to allow the entire field of view to be probed. While the method is accurate and versatile, it is also time-consuming and – owing to the complexity of the translation systems involved – expensive. These drawbacks also apply to systems based on emitter-detector arrays. For these reasons, “rapid imaging with THz radiation continues to present us with big challenges,” says Aleksi Tamminen, Research Fellow at the Millimetre Wave and THz Techniques Group.

He and his team have now introduced a technique for THz-based imaging that avoids the need for moving parts, and requires only a single pair of THz antennas, which serve as emitter and detector, respectively. Instead of having to move the target in order to acquire the signal for the next entry (pixel) in the scanning matrix, the new procedure transforms the emitted nearly Gaussian profile of the THz pulse into a pattern of ‘wavelets’ with the aid of a hologram. A wavelet is a complex time-varying electromagnetic field resulting from the superposition of electromagnetic waves emanating from the hologram. This feature allows Tamminen and colleagues to assign a specific THz wavelet to each position that is illuminated by the dispersed THz beam (Fig. 1).

In the experiment, the radiation from the THz emitter antenna is partially reflected by a beam splitter onto the hologram. The hologram consists of a structured plate with a quasi-random series of peaks of varying heights on its surface. The holographic plate is transparent to the THz beam. By imposing spatially modulated delays on the incoming light, it alters the propagation paths of the transmitted field in a complicated pattern. The complexity leads in to a set of wavelets, whose structures vary in a position-dependent manner. As a result, each pixel of the target on which THz wavelets impinge now “sees” its own unique, time-dependent electromagnetic field.

In order to image the target, the shape of the field at the location of each pixel must be retrieved. To do so, the researchers make use of a reflecting corner-cube, whose position is systematically altered within a targeted region of interest. Its purpose is to reflect the wavelet at each position on the target back onto the detector antenna, which then converts it into an electrical signal. The shape of the complex, time-varying trace of the electrical signal recorded from each position sampled by the retroreflector is unique to that location.

These wavelet data are then used as the input for a neural network (Fig. 2), which assigns the signals to their positions of origin on the target. Neural networks process data by learning to recognize patterns in sets of training data. On this basis, they can derive algorithms that enable them to interpret similarly structured data correctly. In this case, the neural network learns to allocate the various wavelet signatures to the positions of the target.

Figure 2: Fully-connected neural network used to predict target location. The pulse is originated from the THz-TDS, dispersed, and reflected back from the target before it is fed to the neural network (left). The predicted corner-cube locations (blue dots) and the true positions (red circles). Localization down to half-a-wavelength accuracy is achieved (right).

The authors of the study used Menlo Systems' TeraSmart Compact Terahertz Time-Domain Spectrometer, equipped with fiber-coupled antennas for the generation and detection of THz radiation. The experimental setup does not include focusing optics, so that the THz radiation is divergent. In spite of losses owing to the   non-focused optics, the spectral power available was more than sufficient for the purposes of the experiment.

“In combining holographically modified THz radiation with a neural network for the reconstruction of the target, our aim is to provide a rapid and cost-efficient method for THz imaging that employs a single emitter-detector pair and requires no movable elements,” says Tamminen. “The technique has lots of promise, and we will continue to refine it. We hope that, in the next few years, we can significantly enhance the quality of THz imaging.”