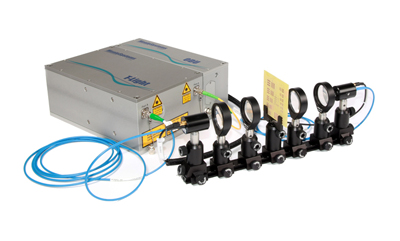 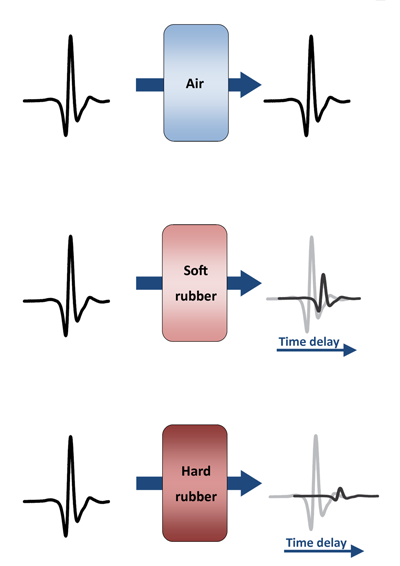 Fig. 2: Illustration of the THz amplitude decrease and the time shift of the THz pulse while passing through a sample, compared to a reference pulse 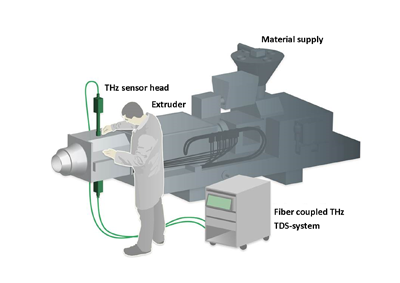 Fig. 3: Illustration of the extrusion machine with adapted THz-TDS-system

Fig. 4: Frequency dependent refractive index and absorption of a mixture based on natural rubber with Shore hardness of 48 and 63

Fig. 5: Frequency dependent refractive index and absorption of a mixture based on natural rubber with Shore hardness of 44, 55, and 60

Fig. 6: Frequency dependent refractive index of synthetic rubber with Shore hardness of 60 and 70 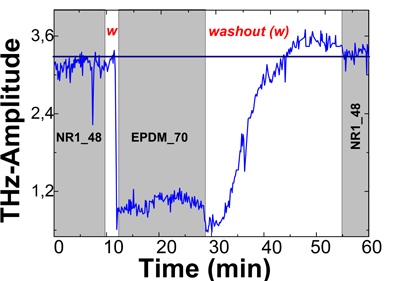 In- and Offline Quality Control of Rubber Fabrication

In everyday life, the importance of flexible low-weight materials made of elastomers is unquestionable. From sealing washers, stoppers, tool handles with optimized haptic perception, to the biggest market share in automotive industry, in particular for wheel tyres, elastomers are designed to reliably withstand continuously grinding force impact or pressure difference. In order to make them harder and more durable, the amorphous polymer elastomers are mixed with additives which on the microscopic scale stabilize the polymeric chains. Most prominent is the vulcanization process of rubber with sulphur as additive agent. The elasticity of the cured material is classified by its so-called Shore hardness which is a measure for the material’s resistance to indentation. It is determined by the amount of additive in the material: the more sulphur is added, the harder the rubber becomes.

Because of the irreversible nature of vulcanization, the correct mixture of elastomer and additive has to be prepared for instantaneous processing into shape. Particularly extrusion works, where the basic raw materials are changed during the fabrication process, need careful monitoring of the different extruded elastomer properties. A general inline testing method of the mixture during the fabrication is crucial. This is even more important since elastomers are often mixed with well-defined amounts of additives like carbon black (CB) or zinc oxide (ZnO) in order to meet specific requirements with respect to stretching, strength and behaviour under continual pressure. For example, carbon black increases the hardness and mechanical strength of the rubber compound after the vulcanization.

At the moment, it is still difficult to control inline the additive content during extrusion of the raw elastomer material before vulcanization. We suggest a novel and effective approach for non-destructive inline testing method using terahertz time-domain spectroscopy (THz-TDS). Driven by the rapid advancement of technology in the last few years, fiber coupled THz TDS systems have gained in robustness, flexibility and reliability to suit the demands of an industrial environment.

Terahertz radiation, located in the frequency range between 0.1 and 10.0 THz of the electromagnetic spectrum, combines the advantages of ultrasonic and near infrared radiation for non-destructive and contactless testing. However, inspection with THz waves is contact-free and it is compatible with a large variety of materials. With THz-TDS one can measure the optical material parameters such as the complex permittivity ε and thus the corresponding refractive index (n) and absorption coefficient (α). Since additives significantly change the THz parameters of elastomers, it is possible to get information on the additive content or their quality during or after the extrusion process. We present a method for offline and inline quality analysis for elastomer extrusion based on THz-TDS and a possibility to monitor the extrusion process of different kinds of rubber.

In general, pure elastomers have a relatively low absorption coefficient and refractive index in comparison to the additives or mixtures. Moreover, different additives have different influence on the elastomers and lead to very specific optical parameters of the final extruded product. To demonstrate the enormous potential of THz-TDS for controlling the amount of additives in elastomers, during and after extrusion, we performed measurements which unveil the relation between chemical material parameters, i.e. the amount of additive, and optical properties, i.e. the complex permittivity. Both, inline and offline measurements require a THz-TDS system of high spectral bandwidth and large temporal scanning range, e.g. Menlo Systems TERA K15 or TERA K8.

As a proof of principle we first determined the optical properties in an offline measurement, using Menlo Systems’ fiber coupled TERA K15 (Fig. 1), with a spectral range exceeding 3 THz and a temporal scanning range of more than 300 ps. The novel antenna technology with increased THz power used in the TERA K15 allows measuring thicker or highly absorbing samples. The TERA K15 system was aligned in transmission geometry for the offline measurements, and the sample was placed into the focus of the THz beam. Each measurement was referenced with a THz trace recorded in air. Sets of rubber samples from three different elastomeric compounds with varying carbon black content and hardness were characterized and the optical parameters have been extracted.

When the rubber sample is inserted into the THz beam, the recorded signal is influenced in two ways: firstly, one part of the signal will be absorbed or reflected, leading to a decrease of the peak-to-peak amplitude. Secondly, the transmitted THz pulse is delayed with respect to the air reference measurement due to the higher refractive index and therefore longer optical path in rubber.

The described effects of the recorded signal are illustrated in Fig. 2. Evaluation of the signal amplitude and temporal position provides information on the refractive index and the absorption coefficient of the rubber samples. Hard rubber with a higher content of carbon black has higher absorption coefficient and refractive index than soft rubber, such that the transmitted THz pulse amplitude is smaller and the pulse is detected at a later time.

To obtain the optical parameters from the recorded THz signal we used the powerful software TeraLyzer, distributed by Menlo Systems GmbH. The software is featured by its easy handling and intuitive interface. The recorded raw data of the THz signal can be imported directly for the extraction of the complex permittivity, and thus the refractive index and the absorption coefficient.

In order to demonstrate the practicability of the THz measurement in the field, we have performed inline measurements where we used a home-built optimized THz-TDS system based on Menlo Systems’ T-Light laser and fiber coupled THz antennas. The setup allowed tailored adaptation of the THz-TDS system to a functional extruding machine. We implemented coplanar fused silica glass windows into the extruder for the THz beam to be able to pass through the elastomer.

Menlo Systems has optimized the T-Light laser for the homemade fiber coupled THz system for operation in a rough industrial environment. THz emitter and detector were mounted to the extruder head and measured directly through the mass flow of the compound (Fig. 3). Inline measurements were performed with natural rubber as basic material, which was mixed with carbon black or zinc oxide during the extrusion process.

In the offline measurements we have confirmed the general idea of higher absorption coefficient and refractive index for harder rubber and quantified the results for various samples provided by ContiTech AG. Three sets of elastomeric compounds, based on different raw materials (two on different types of natural rubber and one on Ethylen-Propylen-Dien-rubber) were characterized with varying amount of carbon black, and hence Shore hardness.

The frequency dependent refractive index for each set of elastomer compounds is summarized in Fig. 4, 5 and 6. In general, higher Shore hardness index leads to higher refractive index. However, only compounds within one rubber batch can be compared quantitatively since the raw materials themselves have different THz parameters. Within one batch, samples with increasing Shore hardness show increasing characteristic refractive index in the frequency range of 0.3 to 1.1 THz. Likewise, the absorption is larger for higher additive content and hardness and rises towards higher frequencies for all samples.

In conclusion, our offline THz–TDS measurements show that it is possible to distinguish rubber with different hardness by their refractive index and by their absorption coefficient.

As a second step we have implemented our home-built THz-TDS system into a running extruder head for an inline characterization of the rubber composition before vulcanization. We prepared two different kinds of rubber mixtures, one based on natural rubber (“mixture 1”, see Fig. 4) with a Shore hardness of 48 (NR1_48), and one synthetic based on Ethylen-Propylen-Dien (see Fig. 6) rubber with shore Shore hardness of 70 (EPDM_70). The two mixtures with different refractive index and absorption were alternately fed into the extruder machine (Fig. 3), and the absorption was measured continuously.

The simplest and quickest way to distinguish between the different materials present within the extruder head is by measuring the transmitted signal amplitude which will decrease for higher absorption. We recorded the THz amplitude over one hour of process time during which the fed in materials were switched three times (Fig. 7). The measurement was started with the softer natural rubber sample NR1_48 which showed relatively high transmission of the THz amplitude. Switching to the harder sample cEBDM_70 leads to a short washout time during which the old mixture has been fully replaced within the THz sensing head of the extruder. The fast decreasing THz signal illustrates this process at around minute 10. Subsequently, the signal stabilizes again for the whole extruding time of the harder EPDM rubber. The decreasing signal amplitude results from the higher absorption of the EPDM-mixture. Small variations might be due to irregularities in the additive concentration, e.g. when the sample is not mixed well during preparation.

The washout time for the hard rubber (minute 30 to 55) is longer, but the THz signal finally returns to the initial level (dark blue line in Fig. 7). This behavior can be understood intuitively.

In summary, THz time-domain spectroscopy is an effective method for monitoring the extrusion process of rubber in an inline measurement at the extruder head. With a fiber coupled THz-TDS system, one can access the mixture within the extruder machine during the vulcanization process. Various types of rubber with different amounts of additives can be characterized. The quick extraction of material properties allows for controlling the mixture composition during fabrication, enabling quick feedback on the quality of the final rubber product.