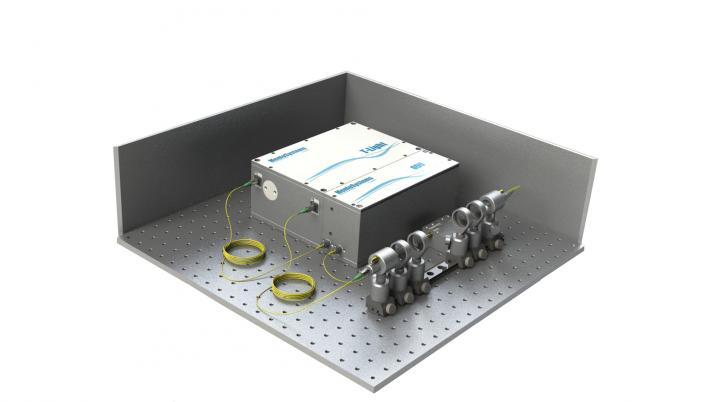 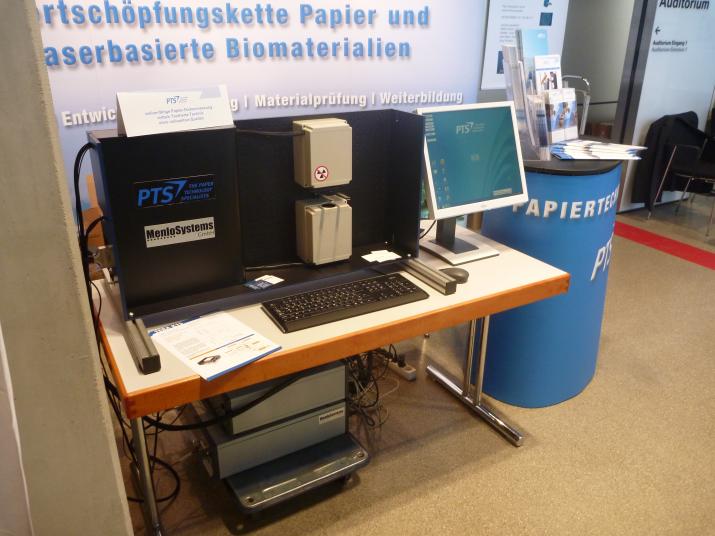 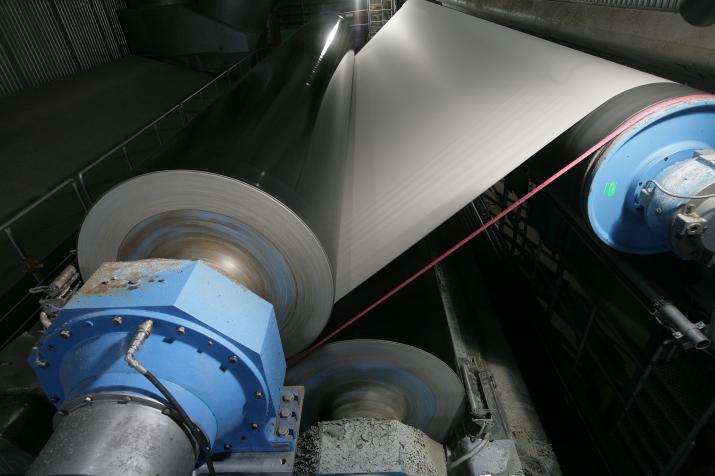 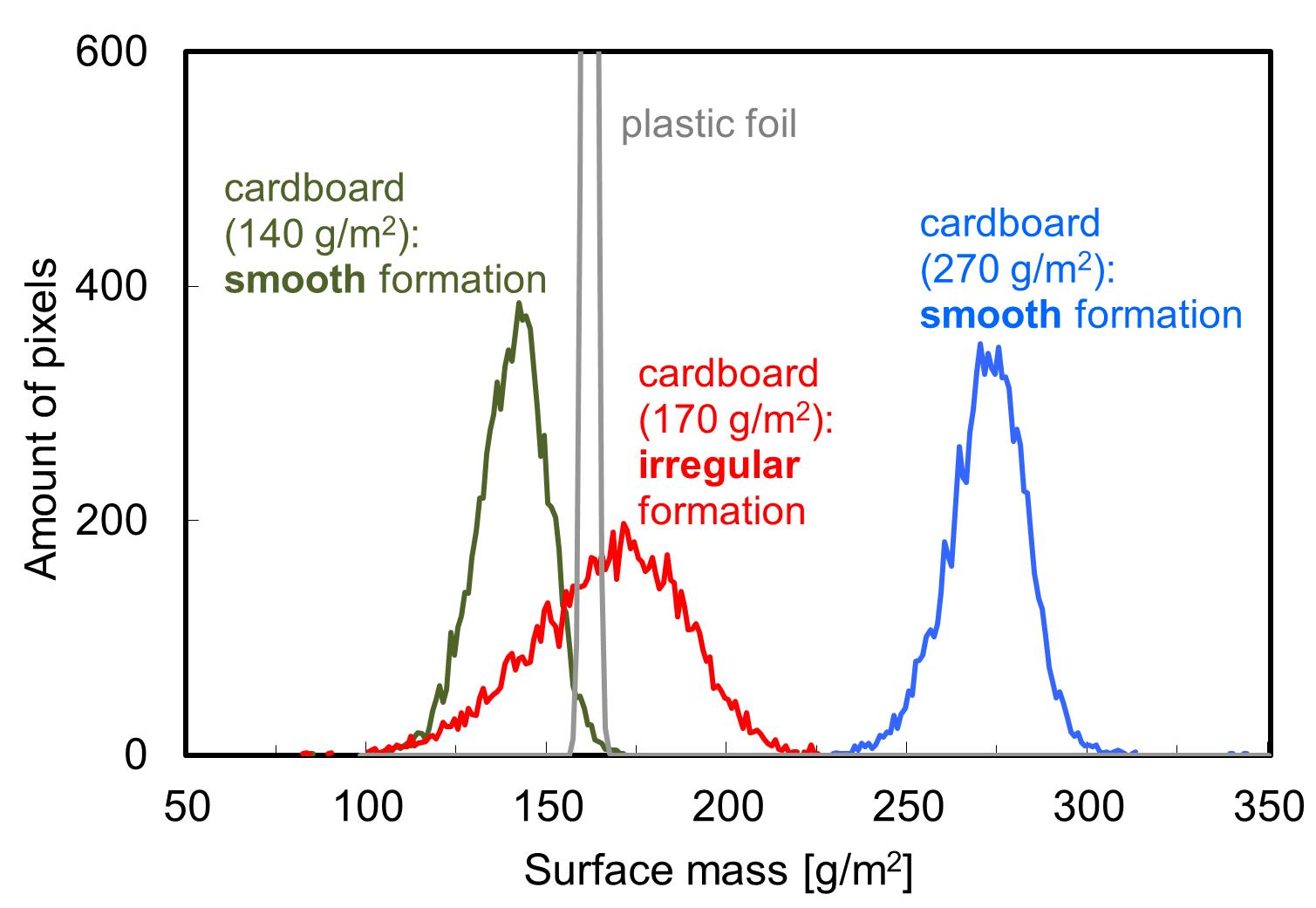 Figure 6: Distribution of the grammage for the two cardboard samples and above, compared to a plastic foil with a similar grammage.

Mapping the Formation of Paper Products

In the fabrication of paper and paper products, the thickness and mass distribution of the material is a measure for the quality of the end product. The manufacture process therefore includes control steps which allow monitoring the paper quality.

In general, macroscopic variations of the mass and thickness in paper and similar materials are optically perceived as irregularities or roughness. When thinner sheets are examined in backlight, areas with higher grammage appear darker than lower grammage, like for example in watermarks.  For thicker fabrics such as paperboard or cardboard, the so called formation has an influence on the working properties of the material.

The formation of paper products can be optically determined with a backlight scanner for up to a grammage of approx. 150 g/m2. For thicker products, more complex radiometry methods have to be used. The Papiertechnische Stiftung (PTS) has presented a novel examination technique using terahertz (THz) radiation to map the formation of both, thinner and thicker paper products. It is integrating Menlo Systems’ THz technology (Fig. 1) into a system for THz imaging in 2- and 3- dimensions. The method is an efficient, eye-safe and economic alternative for existing technologies.

PTS used Menlo Systems’ TERA K15 (Fig. 1) fiber coupled THz time-domain spectroscopy (TDS) system as a source for THz radiation in online measurements. The modular architecture of the spectrometer allows for a flexible arrangement of the THz emitter and receiver antennas and for easy integration into measurement equipment (Fig. 2), or even directly in the paper production line (Fig. 3). For image scanning, the fiber coupled THz modules of the TERA K15 have been mounted into laboratory setup with the 3D-translation unit designed by PTS engineers.

With this integrated setup, PTS has recorded THz transmission images of various types of materials such as paper, cardboard, wood and plastic and evaluated the measured data with specially developed software. The goal of the method presented is to quantify the mass properties of paper in production.

PTS’ THz imaging system allows to characterize different types of paper with a grammage of up to more than >5000 g/m2 and to map variations over the paper surface with an image resolution of approximately 0.6 mm. Even very small variations of the grammage are visible, as demonstrated in the artificially created example of the watermark on a 5 Euro bank note (Fig. 4).

The real strength of THz technology is shown in the measurements of different degree of quality of 200 µm thick raw paper for fabrication of corrugated cardboard (Fig. 5). This type of paper is beyond limitations of conventional testing procedures with backlight scanners.  Whereas the optical images do not reveal any clear quality differences, non-destructive testing with THz waves revealed significant differences in mass distribution inside the sample paper.

Besides the relative presentation in the images, the grammage distribution can be quantified in histograms (Fig. 6) using specially developed software by PTS. The width of a histogram is a measure for the quality of the formation, as in the example of the two measured cardboard samples in comparison with a plastic foil of similar grammage.

The main focus of the method described is aimed at the production of paper and cardboard. It will be also possible to measure grammage and thickness of other materials like plastic foils, textiles and wood products. First measurements show that THz inspection can also be applied to significantly thicker material samples, such as for the 5 mm thick timber boards (Fig. 7). With about 50 % transmission, the material is practically transparent for THz radiation, allowing for a characterization of its inner structure.

In conclusion, we have demonstrated that the TERA K15 is a good option for PTS’ scanning system to obtain information on the formation of paper by THz imaging. To our knowledge, this is the first online application in the field of paper production worldwide. As a first step, the THz system is constantly operating at the PTS pilot paper machine, measuring grammage, thickness and possibly water content. The findings of future studies are to be exploited as new possibilities for the quality control of paper in the production process and subsequently put into practice on the application-oriented scale, e.g. on the PTS’ VESTRA pilot coater. Under real conditions in a paper plant, changing environmental conditions such as temperature and humidity require shielding or mathematical corrections in the data evaluation. Once they have been implemented, the way will be paved for broad industrial application. On the long term, it is expected that common monitoring systems using radiation (isotopes or x-ray) will be replaced by terahertz systems.