WHY 9 CUTS A GOOD FIGURE

figure 9® stands for Menlo Systems proprietary fiber laser design1, the name derived from the characteristic shape of the cavity scheme employed. This primer explains the basic principles behind the technology - and the unique advantages it offers.

In simple terms, mode locking can be considered as a prerequisite to generate femtosecond laser pulses. It refers to designing a laser cavity with operational conditions such that the cavity modes will reliably self-organize into a stable train of ultrashort pulses, with as little of unwanted background and noise as possible.

In femtosecond fiber lasers, this has been commonly achieved by employing so-called intrinsic saturable absorbers - materials whose absorption drops at high optical intensities. However, apart from potential degradation over time, intrinsic effects related to their slow relaxation might cause excessive noise floors2 – which is detrimental to precision applications like optical frequency combs. This has driven our search for a superior alternative: A fast mode locking scheme based on effects other than absorption.

For an intuitive picture, we recall a fiber coupler splitting a light pulse arriving at one of its input ports into two equal portions (Figure 1a). Joining the output ports by a fiber loop, the two portions will propagate in opposite directions and interfere again at the splitter (Fig. 1b). In the simplest case, this will result in the original pulse reflected back to where it came from – the fiber loop acts like a mirror (Fig. 1c).

The reflectivity of the loop mirror changes if the two counterpropagating pulses, for some reason, acquire a phase shift relative to each other before interfering. The phase shift will affect the interference conditions such that a certain fraction of the original input pulse will be transmitted into the second input port, rather than being reflected (Fig. 1d). Now, if the ratio of transmission to reflection can be designed to depend on the intensity of the original input pulse, the fiber loop may act as a fast artificial saturable absorber. 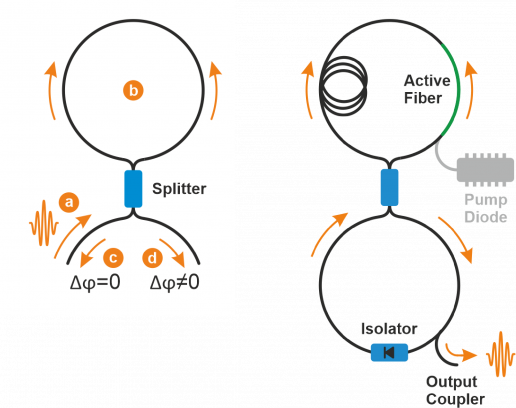 An implementation of the above principle, shown in the upper part of Figure 2, is commonly referred to as nonlinear amplifying loop mirror (NALM). It relies on an asymmetric arrangement of an amplifying doped fiber section and a long section of undoped fiber. The principle of the NALM relies on the phase shift between pulses that are first amplified (and then propagate in the long fiber) and pulses travelling the opposite way around: The former experience a stronger intensity-dependent nonlinearity during the round trip. For an increasing nonlinear phase difference, hence input pulse intensity, the transmission of the NALM increases, very much like a saturable absorber. As shown in Figure 2, mode locked laser operation can thus be achieved in a so-called figure-of-eight laser. A major drawback of this configuration, however, is the difficulty to achieve self-starting of mode locked operation in polarization-maintaining fibers.

figure 9® builds up on the NALM based concept to advance its practicability and functional versatility to yet another level. The approach relies on operating the NALM in reflective mode, rather than in transmission, and allows to implement polarization-maintaining fiber components3. 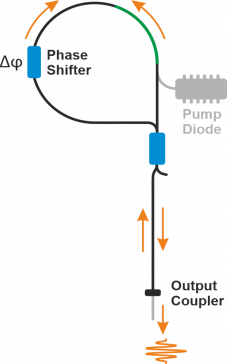 As shown in Figure 9, part of the cavity scheme is straightened into a linear arm, while a non-reciprocal phase shifter in the NALM part biases the phase acquired by counterpropagating pulse pairs. The amount of phase bias is thereby carefully optimized for self-starting mode locked operation at low intensities, and, on the other hand, for highly efficient reflection into the linear arm at favorable operational conditions.

Thanks to its unique features, figure 9® has become the back bone of our femtosecond fiber laser portfolio, combining unprecedented performance with functional versatility:

At Menlo Systems, we are particularly proud that figure 9® femtosecond fiber lasers have also become the working horses in our state-of-the-art optical frequency combs and Terahertz instruments.

Feedback? Hier klicken
This site uses cookies. By continuing to browse the site, you are agreeing to our use of cookies. Find out more.