The Earth’s rotation serves as our reference in order to define the Universal Time (UT). Its revolution can be understood in terms of an oscillation with a period of one day, which is subdivided in hours, minutes, and seconds. Since the appearance of higher frequency oscillators, such as the quartz clock, we have been thriving to increase the precision of time measurements. Today, atomic frequency standards serve as pacemakers, with transitions between well-defined energetic levels in a controlled environment providing the pendulum frequency. The hyperfine transition in a cesium atom currently is the basis of our International Atomic Time (TAI), defining the second within the International System of Units (SI). With the technological advancement of optical atomic clocks where transitions between electronic levels are roughly 50.000 times faster than the microwave transition in cesium, the precision of the time scale is augmented by several orders of magnitude. In a joint effort, researchers from the Joint Institute for Laboratory Astrophysics (JILA) in the USA, the Physikalisch-Technische Bundesanstalt (PTB), Menlo Systems, and the Max Planck-Institute for Quantum Optics (MPQ), the latter three in Germany, recently have demonstrated world record stability of an optical clock within only few seconds of measuring time. They employ a cryogenic silicon optical cavity and a Menlo Systems FC1500-ULNplus ultra low noise optical frequency comb in their strontium clock setup. This breakthrough will have significant impact on clock applications in quantum sensing and fundamental physics, but also on the further advancement of optical clocks. 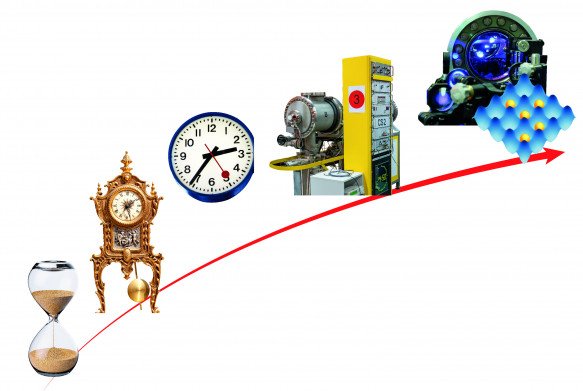 The high stability of a measurement performed with an optical atomic clock is traced down to the stability of the clock’s ticking, the measure of the noise of the frequency standard. Several factors can improve the clock stability, such as a high oscillation frequency found in optical transitions. Likewise, there are various sources of noise which increase frequency fluctuations which have been addressed in the past 20 years, continuously improving the clock performance. Neutral atom optical clocks simultaneously interrogate a large number of atoms arranged in a lattice geometry, this way improving the statistics by minimizing fluctuations of the electronic states’ population, called quantum projection noise.

An optical atomic clock in principle consists of isolated atoms or ions which are prepared in a certain electronic state, a laser probing the transition between two electronic levels, and a clockwork making the clock ticking accessible. The energy difference between the levels determines the frequency of the clock ticking. For so-called clock transitions which are rather immune against the environment, it is extremely well defined. Hence, the linewidth of the transition on the frequency scale is ultra narrow. In practice, the atomic sample has to be prepared in repetitive cycles and the clock transition cannot be probed continuously. The spectroscopic laser therefore plays the role of a flywheel and needs to provide exceptionally long optical coherence time to bridge these dead times when the atoms are not available as a frequency reference. In the frequency picture, the laser linewidth has to match the narrow transition in order to be able to extract the high level of timing precision.

Since noise of the spectroscopy laser deteriorates the clock stability, laser stabilization is a major technological challenge within the optical clock community. An established technique is to apply a high-finesse Fabry-Pérot resonator cavity. The deviation of the laser mode from the cavity mode provides an error signal which serves as a feedback for an active correction of the laser frequency, resulting in a narrow linewidth and long coherence time. Local oscillators referenced to room temperature optical cavities made e.g. from ultra low expansion (ULE) glass offer sub-Hertz linewidth but are fundamentally limited by thermo-mechanical noise. By decreasing the cavity operation temperature this type of noise can be further reduced. In their work, the researchers employ an improved class of ultra stable lasers which are referenced to cryogenic silicon optical resonators. They utilize their novel local oscillator with two strontium (Sr) optical lattice clocks for a minimal level of quantum projection noise. The ultra stable local oscillator also reduces another noise contribution in pulsed frequency standards known as the Dick effect, which degrades the clock stability at long measurement times.

The clock transition addressed in the strontium atoms requires a laser at 698 nm wavelength. Since the silicon material of the reference cavity is not transparent at this wavelength, the stabilization scheme is extended by an additional laser at 1542 nm wavelength tuned to the silicon cavity, and by a Menlo Systems’ FC1500-ULNplus ultralow-noise optical frequency comb which is capable of transferring the exceptional spectral purity of the infrared laser to the clock laser.

To estimate the stability of the optical lattice clocks operating independently, the researchers compare the two clocks by recording their relative frequency deviation. The resulting Allan deviation reveals the stability characteristics with reference to the duration of the measurement, the averaging time. Together with the previously computed contribution of the Dick effect and the quantum projection noise, the researchers infer an instability of remarkable 4.8 x 10-17 during one second averaging time for each individual clock, reaching the 10-19-level in only one hour.

In order to identify the contribution of the optical frequency comb to the clock instability, the group has compared two quasi-identical optical frequency combs by recording their relative deviation at the clock transition wavelength. With an instability of the comb signal of 1.6 x 10-18 in one second measurement time, reaching the groundbreaking 10-20-level after only 200 s, the researchers found that the frequency comb is negligible as source of instability of the clock measurement. Together with the cryogenic cavity it enables long interrogation times and stability measurements close to the quantum projection limit.

This ability of optical clocks to resolve sub-10-18-level frequency shifts on such short time scales presents a significant advancement in clock stability. It will have strong implications on various areas of science and technology, such as the search for drifts in the values of fundamental constants, relativistic geodesy, gravitational wave detection, or search for dark matter.