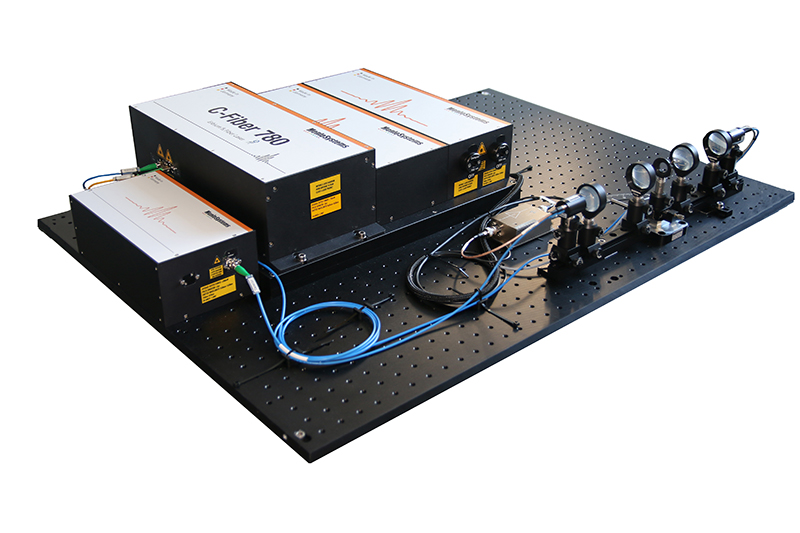 During helicopter landing sand stirred up by strong air turbulence decreases visibility and thus presents a threat to the crew members. An imaging system operating in the THz range provides sufficient resolution and penetration depth through such clouds. A team of researchers from the Institut Langevin at the PSL University and from Safran Electronics & Defense, both in France, used Menlo Systems’ TERA K15 THz Time Domain Spectroscopy (TDS) system in their experimental setup to quantify the attenuation of THz waves under simulated brownout conditions. A simultaneous transmission measurement using a laser diode at 650 nm allows direct comparison to the visible spectral range and serves as a means to estimate the scattering strength and density of the air suspended particles.

Compared to the size of sand grains, the wavelength of THz radiation is very long. Therefore THz waves are only weakly scattered and penetrate through a sand cloud nearly without disturbance. On the other hand, the THz wavelength is short enough to provide sufficient resolution in an imaging system for the visualization of larger objects. For the assessment of such an active imaging system which could aid helicopters during landing, its signal-to-noise-ratio (SNR) needs to be estimated. The calculation requires the input of the scattering properties of sand, which themselves depend on the refractive index and on the size of the grains. Existing databases still lack of reliable information on the refractive index of sand in the THz range since they are based on measurements which do not entirely account for the conditions in a realistic scenario, or where the parameters are not sufficiently specified. For a more accurate determination of the scattering properties, the team proposed a method which is based on the measurement of the beam extinction through a suspension of particles in air. By simultaneously measuring in the THz and the visible (VIS) range, the visibility can be directly compared, and the particles’ scattering strength and density is retrieved from the measurement in the VIS range. Together with the particle size distribution, the real part of the refractive index and the particle density can be deduced.

In order to mimic the brownout conditions for the experiment as close as possible to reality, and to avoid disturbing effects such as coupling to a carrier object or position correlations of the particles, the researchers chose a volume scattering sample of particles suspended in air. A fan fixed to the top of the chamber simulates the helicopter rotors stirring up particles of known grain size distribution, the chamber being sealed by a thin layer of cellophane tape which has been previously characterized for THz attenuation. The chamber contained either sand or glass beads to compare varying particle composition. 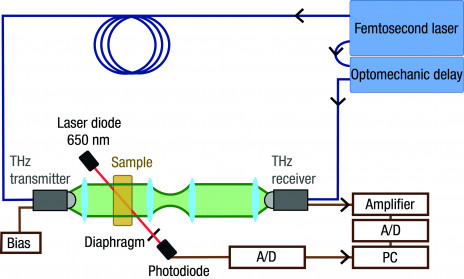 The group used Menlo Systems’ TERA K15 Terahertz-TDS system for the determination of the sample THz parameters and a 650 nm laser diode with for the visible domain, both propagating at a small angle through the sample. For the THz field attenuation they performed the ratio of measurements in a suspension and in a reference without particles (fan switched off). Using a diaphragm before the photodiode, the portion of forward scattered light at 650 nm was eliminated.

To characterize the optical properties of the scattering particles in the THz range, the absorption was neglected due to its minor contribution to the extinction. The group computed the THz extinction due to brownout using the Beer-Lambert law, taking the ratio of transmitted intensities with and without particle suspension. From a Mie theory model they derived the refractive index of the particles and their density. They monitored the particle density over the time by the measurement in the VIS range. The refractive indices were found to be 1.67 for sand and 2,54 for glass beads. The measured value for sand containing a mixture of various molecules slightly deviates from the literature value of 1.96 for pure silica, while for glass beads is consistent with the refractive index of bulk glasses. Due to less than 5 % variation the refractive index assumed to be constant over the measured THz range, what was confirmed by comparing experimentally determined and theoretically calculated extinction efficiencies. For higher frequencies around 2 THz the Mie model does not perfectly match the experimental results. Further, since the refractive index highly depends on the sand composition, it was suggested to characterize other types of sand for an evaluation closer to real conditions.